Categories
Tags
The number of postures in different Tai Chi styles varies greatly. The original Tai Chi form consisted of 13 postures, based on the 8 trigrams and 5 elements. One of the most widely practiced styles of Tai Chi, Yang Style Long Form, uses a form with 108 postures and generally takes at least 20 minutes to complete.

Professor Cheng Man-Ching studied the Yang Style Long Form with Yang Cheng-Fu, of the famous Yang Family lineage. Professor Cheng was one of Yang Cheng-Fu’s most accomplished students, and was given special permission to shorten the form so that he could teach it more rapidly to the Chinese military during World War II. This shortened 37-posture form eliminated many of the repititions that existed in the long form, while maintaining its essence. Professor Cheng taught it for the rest of his life, continually modifying it in terms of the general shapes of the postures and ultimately transforming it into a form designed primarily for the cultivation of energy (ch’i) and health, differing from its mother form which was designed primarily for martial purposes. Called the Yang Style Short Form during his lifetime, today the form created by Professor Cheng is called the Cheng Man-Ching form, because although his final version of the form roughly follows the Yang Style Long Form, the essense of it is quite different. In spite of the changes Professor Cheng made, his form does not betray its martial roots. Concealed within the postures are the original martial applications. Combining highly-developed softness, sensitivity, and energy as cultivated by Professor’s form with the hidden martial applications is what makes this form particularly powerful.

Professor Cheng stated that one should take at least 7 minutes to perform his form for health benefits, and 10-12 minutes for “something more”. The 37 postures of Professor Cheng Man-Ching’s form are as follows:

2. Beginning – or ch’i shih (where you perform the opening breath). Raise hands back and down, more familiarly known as “the ch’i exercise.”

(3a. Preparation for Ward Off, Left – where you relax your shoulders and gain spatial understandings)

3. Ward Off, Left – Also known as tso peng, the foundation of Yang Tai Chi. This is also a great stance to practice rooting in.

5. Roll Back – One of Professor Cheng’s favorite defensive postures: essential for the small to overcome the large

6. Press – an opportunity to transmit power through the wrist of the opposite-side hand

7. Push – a vertical movement, unlike the Yang Style Long Form “Push.” The knee and elbow coordinate in this posture.

Postures 3 through 7 are collectively known as “Grasping the Sparrow’s Tail”, which gives the impression of one playing a tugging game with a bird. Your motions should move forward and backward, like waves lapping at the seashore.

15. Parry and Punch – a neutralization is hidden here

Posture 17 marks the end of the first section of the kung chia, which we call the “Short Half.” This is because it contains approximately half of the total postures in the form and lacks some of the repetitions we find in the second half (thus requiring less time for its performance).

This is followed by Roll Back, Press, Push; then Single Whip in the direction of the corner (or diagonal).

19. Fist Under Elbow – A good stance to practice one-legged rooting

21. Step Back and Repulse Monkey, Left – same as above

Follow these with three more repetitions of Repulse Monkey: Right, Left, and Right.

Follow these with three more repetitions of “Cloud Hands”: Left, Right, and Left; then go into Single Whip.

25. Single Whip, Lower Style – Also known as “Snake Creeps Up” (or Down). An excellent posture for increasing flexibility, power and single-weightedness

28. Separation of the Right Foot – Coordinates the hands with kicking

29. Separation of the Left Foot

30. Turn Body and Kick With Heel – Teaches balance while turning and improves flexibility

Next, step up into Ward Off, Right; followed by Roll Back, Press, Push, and Single Whip.

34. Step Up to Seven Stars – A devastating solar plexus attack.

This posture is followed by Step Up, Block, Parry and Punch then Apparent Close-up, and lastly Cross Hands, which leads to the close of the Tai Chi form

What is Tai Chi Chuan? 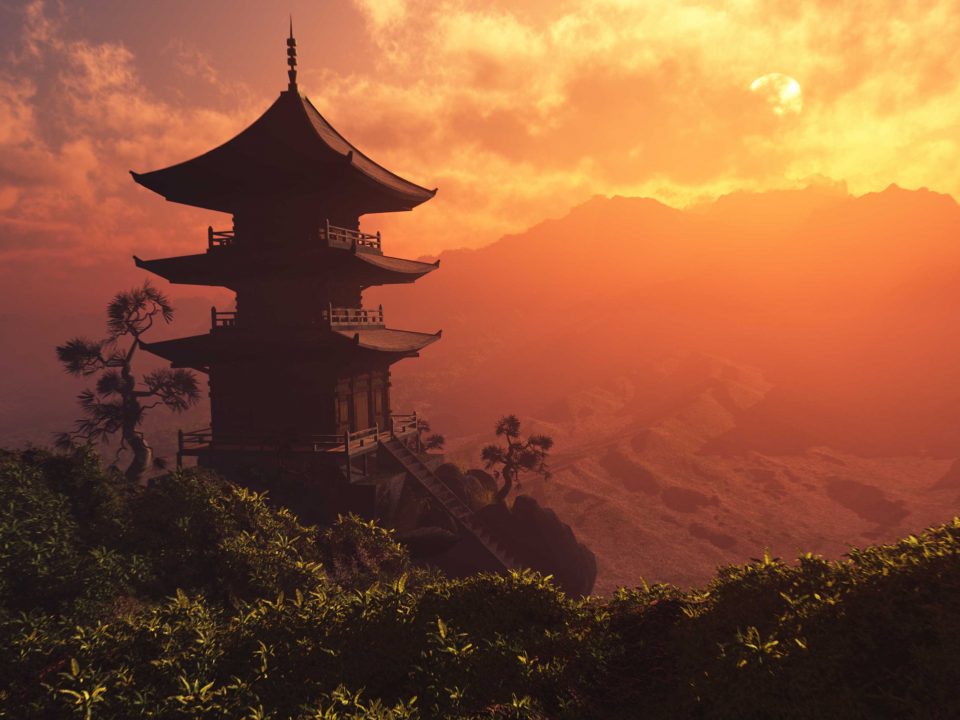 Chinese house in the mountains